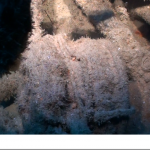 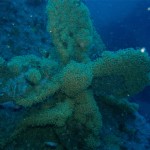 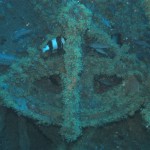 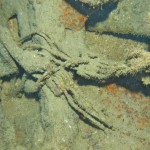 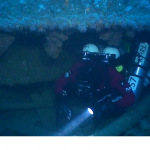 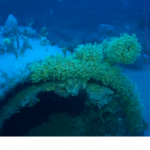 We had watched the weather for a week, each day checking the forecast and then re-evaluating our plans. As we got closer to the day the weather just kept getting better. Heading out from Western Port with just a hint of a swell rolling in and happy that we had the very best conditions that we could ask for all I had to worry about now was the timing of slack water, as it turned out that could not have worked out better either, after completing a drifting deco for 90 minutes we were still only about 100metres from the shot line.

Descending down 66metres onto the wreck which came into view from about 45metres I thought to myself, how blessed are we as wreck divers living in Victoria, nowhere else in Australia are there the number of quality wrecks like ours. The wreck is in three separate parts the bow, which is badly damaged, midships which is totally upside down and then the stern. Our shot line was lying next to the wreck about 4 metres from the funnel, with its over pressurization valve at the tip of the stack. Next we swim towards the stern, it is the stern that has become the must see part of the site. The stern lies on its port side, exactly the same as the Coogee, the difference being as we swim around the stern of the Coramba we find the twin screws with the rudder hard to port. This would have been Captain Dowling’s last command to the helmsman as he tried to keep the ships head into the southwesterly gale that was to claim 34 lives state wide. Next we swim towards the midships, here we enter the wreck swimming into the engine room where the Telegraph lies amongst the tons of debris that make up the ships fittings. We had two objectives to complete and with this done it was time to start our ascent. Although not the prettiest wreck we dive and certainly there are no artefacts at all on the site and the ship is badly broken up but still this is a very special wreck. Apart from the fact that this wreck was Victoria’s most looked for shipwreck and that SOE had spent 8 years looking for her, it is the human side of the story that makes this site so special and I for one cannot wait for Des Williams and Peter Taylor to rewrite the book and finally tell the story of ‘the ship the sea swallowed’ .