Today a team of Aquability divers (& all MAAV Members) dived on the Adieu for the purpose of a photogrammetry project for Heritage Victoria. We did two dives, the first dive was to give the site a ‘hair cut’, removing as much of the seaweed as possible. The second dive was for the photographers to take a variety of photos that hopefully, the special 3D software can stitch together to make a 3D module we can publish on the web site. The site conditions were amazing as the divers swarmed over the small site. At a depth of only 2 metres, our bottom time is almost unlimited.

The Adieu was a 12m Lime Trader that sank in the 1882, the sailing ship ran aground and broke up immediately. Under the control of Captain David Inverarity, the cargo of Lime bags had been jettisoned in an attempt to lighten the ship.

Ian Scholey taking photos of the Adieu for the photogrammetry 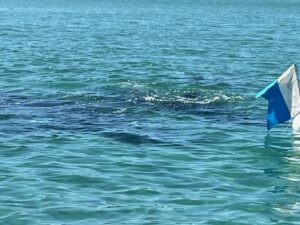 Divers on the site of the Adieu, giving the site a ‘hair cut’.