The strong, cold wind continued to blow, however the dive conditions were quite good again, a little bit of surface slop, but once under the water it was very good. There were several groups of divers out enjoying the conditions, more photographers than I would have thought, given that the chance of the viz being poor was high. But, they got their reward for being persistent & turning up & the ones I spoke to were very happy with the viz. The wind was cold, it was warmer in the water than out, enough so that even the fisherman stayed away!! I don’t think I’ve ever been the only person standing on Rye pier on a Sunday afternoon before, no matter what the weather was.  It was surreal standing o the pier & realising there is not one other person here – except for those under the water of course.
The day was finished off with a nice steak & a glass of wine at Rye Hotel of course :). 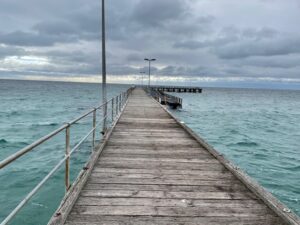 Not one fisherman on the pier!!!