As usual when we do Standard Dress dives, we had quite a crowd watching us as we kitted up the divers one by one for their dive. This was the first IANTD Standard Dress Course run in Australia, and hopefully it will be one of many, the dive conditions could not have been better, especially considering the sea conditions on Friday. The divers, seated next to the entry ladder would be ‘dressed’ by his ‘tenders’, with the corselet and shoes being fitted first, and then the brails & weights. Once the diver had been dressed the helmet is then placed into position, safety checks completed and the diver assisted by his tenders then climbs down ladder. Once on the bottom it is surprising how buoyant this gear is, the divers have a couple of skills to complete before they then go for a walk along the sea bed, with the safety diver following behind taking the odd photo as something to show off to your dive buddies, but of course it could be anyone in that helmet so the one photo every Standard Dress diver wants is the ‘hero’ shot – the photo of the diver sitting on the stool with his helmet on his knee just prior entering the water. So here are a couple of hero shots from Saturday!
Special thanks must go to Warren Jackman who not only pushed to make this happen, but also provided his equipment to allow it to happen. Also Ben & Youri for their 3 hours each in the water as safety divers. 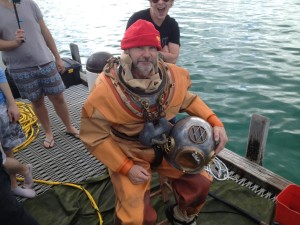 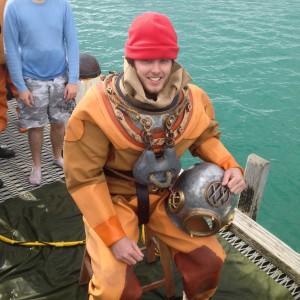 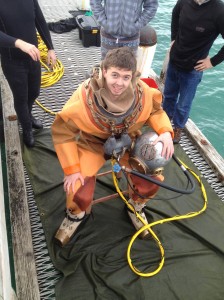 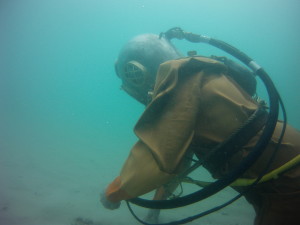 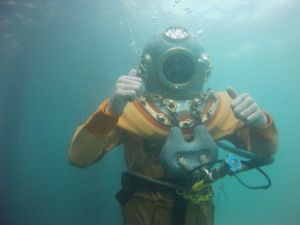 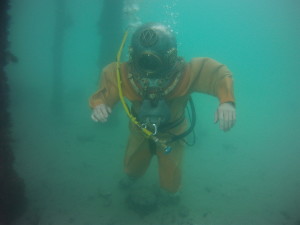