Bert & I were helping out Kim and others with the collecting of samples at Rickett’s for National Parks, who are running experiments on cultivating shell fish in several areas around Port Phillip Bay. The conditions were fantastic as we made to 500 metre surface swim out to the area where the experiment had been set up several weeks ago. The viz was as good as it gets at Rickett’s 8-10 metres albeit with a bit of a green tinge to the water. Our job was to record the site with photos, video & note on a slate the growth of the individual shellfish. We then collected the sample plates and returned them to the shore, for the team to photograph and analyse the growth of the shell fish. We had a nice swim back to shore with plenty to see as always at Rickett’s. Hopefully these experiments will be successful for the team and we may once again see the shell fish return to the northern end of the bay!! 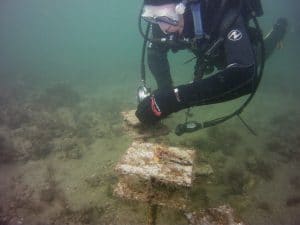 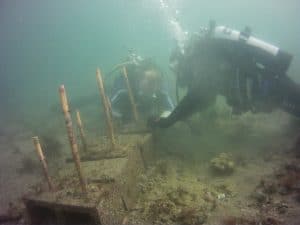