We were due to depart Flinders Pier at 7.30am but due to fog and some bigger than expected swell at Port Phillip Heads, the boat didn’t depart until around 8.30. Once on site the full boat emptied very quickly. A perfect shot drop had us right on the wreck which lies upside down after being scuttled in 1976. With plenty of access points and lots of space inside she is an easy wreck to penetrate. Big schools of Bulls Eyes inside and equally large numbers of Yellow Tails outside, comprise the main fish life. Several Cuttlefish also inhabit the healthy weed growth that covers the hull and surrounding reef. With a planned run time of 100 minutes we had ample opportunity to do a couple of circuits. Viz was around 7-10m with a small amount of surge making for pretty good conditions on the bottom. All in all a terrific dive on one of Victoria’s better wrecks. 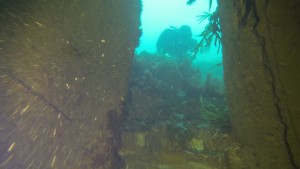 Push looking into the wreck.