When Gary mentioned that he wanted to visit his great uncles grave site on the Gallipoli Peninsula, I thought not only is this a great opportunity to be a part of some thing special but also it would give us the chance to dive some of the wrecks of ANZAC Cove. So many of our tour group have relatives that remain here from 1915, this was to be a very special time for our tour group. I am one of the fortunate ones that had both grandfathers survive the invasion, only to then be sent on to the Somme.

Today we planned to do an on water tour of ANZAC Cove, we have done the land tour, however, seeing it as the diggers would have seen it from the ships and landing craft was some thing special. At first we were a mile or two off shore, then coming into shore we get an up close of the landing areas. First Tasmania, then Brighton Beach, ANZAC Cove, Lone Pine, Shrapnel Gully, the Sphinx, Johnstone’s Jolly, The Neck, Quinn’s Post and the famous Chunnuk Bair, the furtherest point of the advance.

Of course we were not going to pass up the opportunity to get in another dive. One of the landing craft was selected as the dive site, this was one of the more emotional dives that we have done here, the thought that perhaps one of our relatives may have used this actual barge to come ashore made everyone stop and think for a minute of the sacrifice of our fore fathers.

Those traveling to Gallipoli with a tight budget can stay in Eceabat, where the average price for a room is AUS$35- a night including breakfast, however to be apart of the real Turkish experience you will need to travel by ferry to Canakkale. Canakkale really is the only place to stay, it has all of the night life and by far the best accommodation. We found the ‘Akol Hotel’ very good, the ‘Check In’ and ‘Hang Over’ bars are amongst the best. For about AUS$110- per dive you get picked up from your hotel, driven to the dock where the boat awaits you and morning tea & lunch are also provided. The diving is great, with 20m viz, however we did get blown out for 2 separate days. 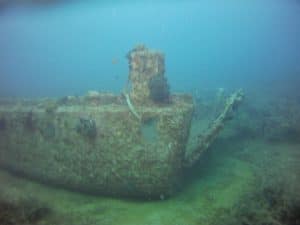 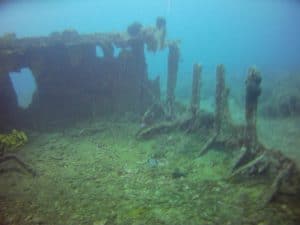