50 Fascinating Facts About The Ocean

50 Fascinating Facts About The Ocean 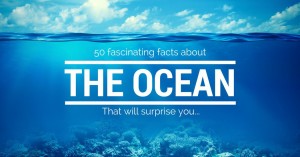 The Importance of our Oceans

The majority of the world struggles to understand the importance of our oceans however, whether you live inland or right on the coast, the oceans are of extreme importance to all of mankind.  From the air we breathe to the food that we eat, to the water that we drink, we owe it all to the oceans. The oceans cover roughly 71% of the world’s surface and are home to some of the most commonly used trade routes, which span around the world. People do not realise the impact that the oceans have on our lives. The parts of the computer that you are using right now came from countries across the oceans and most likely travelled by boat to get to where you are today.

Not only should we be thankful for trade routes, the ocean produces over 14% of the world’s source of protein and is home to some of the most spectacular marine species and plants. Some of which, have been known to be used medicinally to help with pain relief, inflammation and have even been used to help in the fight against certain kinds of cancer.

In addition to the medicinal side, the oceans also act as a sponge, absorbing over 50% of the carbon dioxide that is in our atmosphere. Without this, mankind would have suffered severely with the effects of global warming.

There is so much to learn about the ocean and it is unbelievable to think that scientists and marine biologists have only really touched the surface and have explored only 5%. If you are looking for some more interesting facts about the oceans, then take a look at the infographic below, which will leave you shocked. Created by the team at divein.com, you will be surprised at how little you know about these vast watery deserts that take up so much for our planet’s surface…

50 fascinating facts about the ocean – Graphic by the team at DIVE.in